Why I Always Get the Guacamole

Does this sound familiar?

I’m starving—like eat my shirt starving. I see a local Mexican joint and casually sprint towards it. After waiting in line for 3 agonizing minutes as the annoying person in front of me tries to decide to get steak or chicken in their burrito, it is finally my turn!

Guy: Do you want to add guacamole? 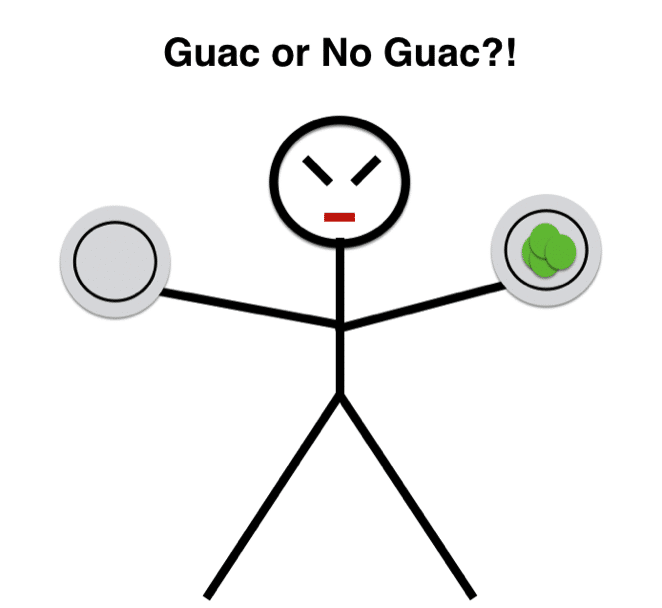 Me at this moment

At most Mexican places the guacamole costs extra – like 50 cents or a dollar. Not much, but extra nonetheless. As a bootstrapped entrepreneur, I used to always be thrown into a tizzy of guilt and apprehension about stupid guacamole. In restaurants I became that annoying person who didn’t know what they wanted. My mind raced with this kind of back and forth: 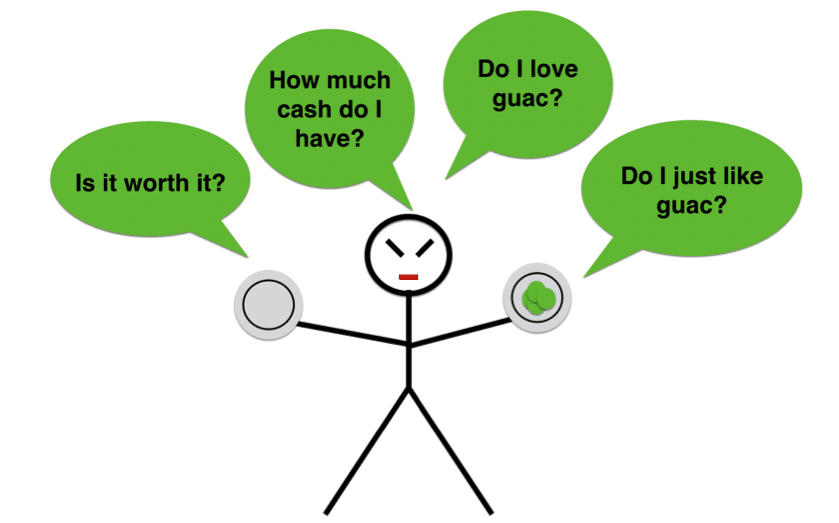 Two minutes later I would make a decision based on how much cash was in my wallet and how hungry I was. Here is the worst part: I always set myself up to lose.

After one of these experiences I realized how much energy I was wasting on this decision and many others just like it. There are three forces at play here:

I once read that President Obama wears the same suit every day because he doesn’t want to have to make even one more decision during the day. He already makes thousands of decisions so he eliminated one small one. Your ability to make decisions is a muscle. Every time you make a decision, no matter how small it exercises the muscle. I noticed that the guacamole decision was even harder on a day that was particularly busy. Why? My decision muscle was tired. I decided to start to think about the questions:

What decisions can I eliminate?

A Blanket Decision: A decision that carries forward as the answer for all circumstances.

So I sat down and made a decision day. I listed out tons of decisions I make on a daily basis and then spent time weighing the pros and cons of each. If you do this once well, you do not need to do it again. Then I ended with a few blanket decisions. Let’s see how this works with guacamole:

Conclusion: The amount of extra enjoyment it gives me in a meal is far more than the incremental extra cost.

Bonus: If I’m not making enough money to afford guacamole, the guacamole isn’t the problem.

And this is when I decided that from now on: I will always order the guacamole. I made a bunch of other blanket decisions on that day as well and continue to have decisions days for myself once a year. I have these in my business as well. Like:

Do a decision day. Think about the decisions you make every day. Make some blanket ones and save yourself the time and energy.

This experience also made me realize that guilt is a waste of energy. The worst part was that I was guilty if I said yes and I was guilty if I said no. I never let myself win! Guilt is an emotion that we usually cannot control—but sometimes we can. Think about the last few times you have felt guilty. Were they legitimate? Did the guilt help? After my decision day I realized I had to slowly start letting go of guilt too. I did this with guacamole, but I have also applied it to other areas of my life as well.

Think about when and why you feel guilty. Now re-evaluate the guilt. Is it still worth it? Make some new rules. Let things go. Move on.

#3: Energy Is Not Infinite

I frequently worry that I worry too much. Yes, I do understand the irony in that statement. If you are a fellow worrier, you know how exhausting it can be to circle around an issue over and over again in your head. But do you know it also takes up valuable time and energy?

It is very clear that time is finite. You have 24 hours in a day. 60 minutes in an hour. 60 seconds in a minute. So I am ruthless with my time efficiency. I like to maximize every second. However I never used to apply this to energy. Specifically, mental energy. Time I spend worrying. Time I spend ruminating. Time I spend in anxiety. Time spent in guilt. Then I realized: The time I spent waiting in line worrying about guacamole, could have been spent in much better ways. It’s like this:

I realized mental time is in fact finite. There is a limited amount of mental energy you have—why waste it on stupid thinking?

Where does most of your mental energy go? What is a waste? What would be more useful? Decide to reclaim some of your mental space for something that serves you.

Bottom Line: Stop worrying about the same things over and over again. Reclaim your mental space. And really, the guacamole is always worth it.