Do you think Amanda Knox was lying?

8.5 million viewers tuned in to watch Diane Sawyer’s interview with Amanda Knox. Knox was accused of murdering her roommate, Meredith Kercher in Umbria, Italy in 2007. She spent 1400 days in jail before her case was overturned.

Her case and behavior have been shrouded in mystery. Followers of the trial have wondered:

Did she really kill Meredith Kercher?

Is she hiding information about the murder?

Does she know more than she is willing to reveal?

Her interview with Diane Sawyer brought to light some new issues and her body language and nonverbal cues might have given us more information than what she actually said.

I wanted to go through the interview and point out which body language cues matched up with her verbal message of innocence and which nonverbal actions were red flags and did not match her statement of innocence. It is important to note that you cannot do accurate lie detection without the first step of deception detection: baselining. Baselining is when you take note of someone’s nonverbal behavior when they are telling the truth and not nervous. More on baselining here.

Since I was only able to watch Knox’s interview and was not able to baseline her, below I will point out a few of the red flags from the interview where I believe Sawyer could have dug a little deeper as her body language did not match her verbal answers. 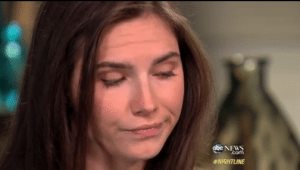 Another positive sign that Knox’s words matched her body language was when Diane Sawyer read out the nicknames the media had given to Knox, such as “she-devil with an angel face.” Knox listened to the names and then said, “I haven’t heard those,” while showing a microexpression of contempt–a one-sided mouth raise. This facial expression of hatred is in congruence with her verbal statement of being wrongly accused. See a full guide to microexpressions here.

A big red flag and mismatched body language was during one of Diane Sawyer’s most important series of questions. Here is how they went:

First, Sawyer asked Knox, “Did you kill Meredith Kercher?” Knox says “No,” very directly, with eye contact, no odd facial tics and, most importantly, a side to side head shake–the nonverbal sign of “no.” This negative head shake matches her negative statement and the absence of facial leaks is also devoid of deception.

Second, Sawyer asks, “Were you there that night?” Knox’s verbal answer is the same, “No.” Yet, her nonverbal behavior at this question is different. She says “No” then flashes a microexpression of surprise and nods her head up and down–the position of “yes.” Here her nonverbal does not match her words. There are a number of reasons why she could have shown that surprise and head nod. Occasionally people raise their eyebrows as a verbal punctuator or exclamation point. Again, not a sure sign of lying, but a definite red flag in my book. 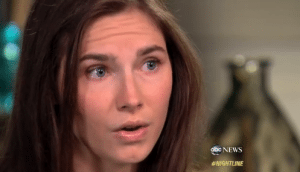 For most of the interview Knox’s posture and the way she held her hands was quite relaxed. This matches her stance of innocence and that she has nothing to hide. The only time she showed extreme nerves was during the intense swallow following Sawyer’s question about withholding information.

6. MISMATCH: Lack of Indignation and Sadness

Several times during the interview Knox verbally expressed sadness and outrage, but did not show these microexpressions. For example, Knox says that “it could very well have been me,” when referring to what could have happened had she had been home. Yet during her comments she shows absolutely no sadness or anger. When she makes the strong statement: “My friend had been murdered and it could just have easily been me,” Her face is completely devoid of emotion. She goes on and sighs, but still no facial emotion of this traumatic event. This lack of emotion does not match her strong words. Again, we don’t know if this is because she is numb from the events or because she has rehearsed these lines so she no longer shows emotion, but it is still a red flag.

Knox’s behavior over the past 4 years has been radically different. After all, we have watched her grow from a college girl into a woman all on the news and in court. She notes in the interview that she wishes she could have handled it all in a more mature way. Our biggest challenge is to differentiate immaturity from guilt.


Ready to keep learning? Read on...