Habits: How to Form Better Habits and Break Bad Ones 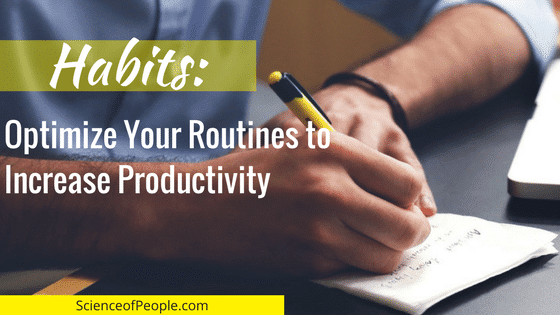 In our effort to become more productive we often download new apps, optimize our schedules, eliminate distractions and try a host of other productive things. However, have you ever considered the role your basic, day-to-day habits play in your success?

Habits are powerful productivity tools because they can drastically reduce the time and effort we have to invest in our routine responsibilities.

This allows  us to dedicate more attention to the activities that add meaning to our lives.

The number one factor that limits our ability to achieve our goals – of any variety – is not our abilities, finances or circumstances. It’s our willpower. If you had unlimited willpower, none of the challenges you face would stop you because you would have the strength to overcome them or find an alternative solution.

The challenge is, no one has unlimited willpower. Numerous studies, including several cited in the book, have shown that willpower is like a muscle. The more of it you use, the more worn out you become and you eventually hit breaking points where you have no energy left to keep exerting effort. That’s when you do things like blow off a networking event to lay in front of the TV with a bag of chips.

Also like a muscle, you can strengthen your willpower over time and that’s where forming habits can be a powerful tool. Building habits reduces your dependency on your willpower levels because it limits the amount of decisions you need to make to do the things that make you successful. The more habits you have, the more willpower you have saved for tasks that can’t be turned into habits like solving unique problems and tending to your relationships.

Think of all tasks that you do regularly on a daily basis that have very little variation. Once you’ve got a list, create routines to do those tasks the exact same way every time so that they become habits. A great starting point is your morning routine. Follow it every day so you never waste time or willpower deciding if you have time for breakfast or wondering where you left your keys.

How to Create New Habits That Last

Research, largely based on habit-forming abilities in memory-loss patients, has discovered that our brains have a simple, yet powerful, mechanism for developing new habits. It turns outs, habits work a lot like muscle memory; when a cue prompts you to do them, your brain/body carries them out with little conscious thought.

Here’s how to form habits fast:

For example, if you want to start a morning running habit, make the everyday cue getting out of bed and seeing your running shoes waiting beside your bed.

#2 Give yourself a reward

Your reward may be intrinsic to the activity or something you give yourself after completing the habit. For example, many people feel like the endorphins they get from running is a reward. Others use a physical reward like treating themselves to a healthy snack or a bit of relaxation so they have something to look forward to when the run is over. Regardless, you need something motivate you to stick with the habit.

Habits are fragile. Taking a day off or dealing with stressors during the time you’re supposed to complete your habit can easily cause it to derail. This is how you can keep up a perfect exercise habit for months straight then you take one day off to catch up on chores instead and that leads to another day off and then another. Next thing you know, your habit is broken.

You can prevent this from happening by having plans for dealing with scenarios that may cause you to break your habit. An example Duhigg uses in the book involved a group of orthopedic surgery patients. Many people never fully recover because they are unable to push through the pain of keeping up their physical rehabilitation habits. There is however, one group of patients who recovered more fully than any other. Some patients, without being instructed to, created plans for dealing with the most painful moments in their rehab routines – the same point where many others broke their habits. The patients’ plans often involved reminding themselves of the reward they would receive immediately following their rehab exercises.

To maintain habits, you need consistency. Plan to do whatever it takes to achieve this. There is one other catch here: Duhigg’s research reveals that no matter how well you follow the rules for creating new habits, you will be unable to do so unless you believe change is possible.

If you don’t believe that your habits will change, that psychological block will prevent new habits from forming.

How to Break A Bad Habit

Often to build new habits and achieve your goals, you need to replace your bad habits. Notice how I said replace not end. Bad habits are extremely hard to end with a decision to do so because, whether it’s rational or not, our brains crave the reward the bad habit provides. In moments when your willpower is low, your craving triggers the bad habit to return.

To replace your bad habits you need to reduce your craving by limiting your exposure to things that trigger it and find a replacement reward that satisfies the same craving as the bad habit.

For example, if your bad habit is going straight for the junk food when you get home from work, you can lessen the craving by eating a healthy, mid-afternoon snack and have another healthy snack with a similar flavor as your favorite junk food (sweet, salty, etc) waiting for you at home.

Habits don’t just affect individuals. In the book, Duhigg describes how, over time, habits can form across teams and even entire organizations. If you are a leader, this is important to be aware of so you can observe what habits govern your team’s behavior.

A powerful example Duhigg uses is of a toxic workplace culture at a hospital where the relationships between nurses and doctors were so fractured that the nurses developed habits of color-coding doctor names on whiteboards based on how difficult the doctor was to work with and other ways of sending messages and taking actions behind the doctors’ backs.

After the hospital received bad press and hundreds thousands of dollars in fines following a series of malpractice cases due to doctor carelessness, the administration stepped in to overhaul team habits. This included instituting all new-habits through checklists and additional cameras and other oversights to ensure that hospital employees carried out the habits.

While your team’s bad habits may not be as extreme, they do affect every individual’s productivity and performance levels.

When it comes to changing the habits of a group of people, the key is to focus on keystone habits – single habits that influence people’s behavior in multiple ways. Think about the tasks your team struggles to complete productively due to stress and/or lack of structure and choose habits that will eliminate, or at least minimize the issue.

Case Study from Science of People

For example, here at Science of People, we’ve been working on our productivity habits. In the past, we’ve given our team the freedom to set their own ways of working. It was fine, but we often got lost in emails and struggled to understand what the most urgent tasks were. Now, we have every person on the team check our project management tool Asana – not email – as the first thing they do everyday. This sets the habit of them knowing what the day’s priorities are rather than having them work in a reactionary state and/or work productively but on the the wrong things because they don’t know what tasks are the most urgent.

Bottom line: Once you’ve identified the keystone habit(s) you’re going to target, create a habit loop where you have your employees act on the positive habit so many times that their response becomes automatic.

Like with other goals, track the progress from both your individual and your team’s habits so you can continually identify areas of improvement.

Vanessa Van Edwards is a national best selling author & founder at Science of People. Her groundbreaking book, Captivate: The Science of Succeeding with People has been translated into more than 16 languages. As a recovering awkward person, Vanessa helps millions find their inner charisma. She regularly leads innovative corporate workshops and helps thousands of individual professionals in her online program People School. Vanessa works with entrepreneurs, growing businesses, and trillion dollar companies; and has been featured on CNN, BBC, CBS, Fast Company, Inc., Entrepreneur Magazine, USA Today, the Today Show and many more.

What It Is & How To Read It

What Are They & How To Improve Yours

16 Science-Backed Skills to Use Today

What Is It & How You Can Develop Yours

How to Become Successful

20 Hand Gestures You Should Be Using

Get my free audio training and learn the people skills I’ve taught 500,000+ people to increase charisma and success