The Science of Teens

I speak a lot about the science of teens; What research says about why teens behave the way they do. Here my top five brain notes that all parents should know…and keep in mind with a teen in the home. 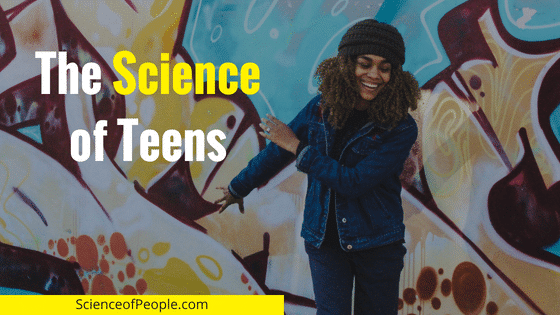 In research done by Csikszentmihalyi and Larson, adolescents were given beepers to record their moods and activities for a week. The subjects were paged at random times and asked to write down how they were feeling and what they were doing. This, no surprise here, showed moods fluctuating rapidly from negative to positive several times each day, especially for teen girls.

In her book The Female Brain, Brizendine points to major girl boy differences as a result of hormones. Here are the documented differences: (If you are like me, it was nice to see that some of the differences below are actually common, and not just with teens I work with).

Many teens spend their time daydreaming about fantasies based on what they see on TV and movies (I certainly did…perhaps still do to some extent). According to the study: “Occupational portrayals on television: Children’s role schemata, career aspirations, and perceptions of reality,” researchers found that children often cannot distinguish between real life and TV fantasies. This is one of the reasons why many teens develop infatuations with celebrities and are addicted to shows that they think should portray real life.

According to Margot Sunderland, the brain’s stress response system needs to be developed in the amygdala. People who have not established stress response systems in their brains, can suffer all kinds of problems: Depression, persistent states of anxiety, phobias and obsessions, physical symptoms and ailments, being cut off emotionally, lethargy, lack of excitement and lack of spontaneity. Many teens are not taught how to respond to stress, and therefore are actually lacking the proper brain pathways to deal with anxiety in healthy ways. When teens feel overwhelmed, it is often because their brain can literally not handle the inputs.

Two researchers at UCLA actually discovered that social rejection actually registers as bodily injury or pain in the brain! There might not be that big of a difference between a punch and a catcall. This helps adults understand why teens can be so upset and swept up by what happens with their peers.

I will continue to post more science of teen explanations and behaviors because I think it helps us understand why teens and parents get into certain cycles.