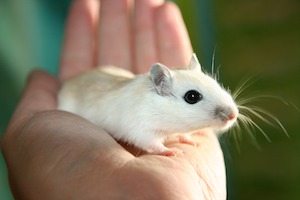 Have you ever heard of the expectancy effect? Once upon a time, a pair of adventurous researchers had participants undergo a unique experiment. They were told they had to train rats to quickly make it through a maze.

But, of course, there was a catch.

There was absolutely no difference between the two groups of rats! Both sets of participants got randomly selected rats with no maze experience at all.

Yes, you read that right. The rats were exactly the same, but the participants who were TOLD they had faster rats somehow helped the rats actually perform better. This study has been repeated over and over again. It’s called The Expectancy Effect.

The Expectancy Effect: When someone expects a given result, that expectation unconsciously affects the outcome or report of the expected result.

When a participant expects to have a certain kind of outcome they will, without realizing it, change their actions and behaviors to actually get this exact outcome.

This concept gives us a lot of power.

Dozens of studies have proven The Expectancy Effect outside the lab, with rats, dogs and humans alike.

How to Use the Expectancy Effect in Teams

The single biggest mistake leaders make is to assume the worst.

The problem is that leaders often are brought in to fix problems. They are asked to lead a ‘low performing team.’ They are asked to train a group of ‘inexperienced newbies.’ They are asked to fix a ‘problem area’ of the business. If you want to be a truly incredible leader, you can’t just think about solutions or ideas, you have to address your own expectations. Here’s how:

Step #1: What Are Your Expectations?

For example, I have an explicit expectation that ice cream is tasty, but not very healthy because I have been told this by both advertisers (the tasty part) and my Mom (the unhealthy part). I also have an implicit expectation that ice cream sometimes makes my tummy hurt, and I might be lactose-intolerant. This is a silly example, but it gives you an idea of how we have expectations that are forced upon us, and ones that we come up with ourselves.

I want you to identify both your implicit and explicit expectations in the important areas of your life. For example, if you are on a work team:

These are your explicit expectations. Take out a sheet of paper and write down everything you can think of. If you’re on a creative team, you might have bullets such as this:

Fill in the blank for your team or topic.

Step #2: What Are Your Implicit Expectations?

Now let’s identify your implicit expectations and beliefs. These are much harder to identify, so you will have to dig deep! Ask yourself what expectations you have. Answer the following questions on a blank sheet of paper:

Let’s look at the creative team again. You might notice that:

Implicit beliefs are incredibly important, because they will dictate your future. You might have had one bad experience that made you form an expectation. That means that one bad experience actually is setting a precedent instead of staying as a standalone incident. This can be both good and bad. If you expect the team to be cutthroat, you will be looking for that behavior and even may be unintentionally driving it. If you think your team is great, they are more likely to be great.

Now it’s time to identify which of your expectations serve you and which ones damage you. Go through your list of explicit and implicit beliefs.

Circle the positive ones and underline the negative ones.

Try to build on the positive list as much as possible. Can you add more details? More examples? More stories? You want to leverage the positive expectations, because then these will turn into even more positive outcomes. The negative ones need a different process. Pull out the negative expectations and put them on a new piece of paper, one by one. For the creative team, this might be:

Make sure this list is complete. Add any other worries, negative ideas, or bad expectations you have.

Step #4: Argue with Yourself

Now it’s time to decide if your bad expectations are actually true or assumed from a few bad experiences. Author Annie Duke outlines a set of hard-hitting questions in her book Thinking in Bets. We can use these to identify our biases and challenge the accuracy of our beliefs. Answer these three questions for each of your expectations:

The point here is to argue with yourself. Challenge your beliefs. Take the stance of a naysayer and shut down each of your expectations. Hopefully, this will bring some questions back into your expectations. Can you turn some of those bad expectations into single experiences, rather than assumptions?

Any lurking negative expectations will drag you down. You must either eliminate them or actively work to fix them. If you don’t work on eradicating bad expectations, they will fester and grow like a fungus under the floorboards. They will get bigger and bigger until they make you sick.

Leaders especially must  address these for themselves AND their team. Once you have done this for yourself, you also should do this exercise with your colleagues and employees. What are the implicit and explicit expectations of the group? What assumptions are being made? What’s lurking? Here’s how this could work in action with a team.

Let’s say you sit down to talk to your sales team. You have them watch the video at the start of this article together. First, you go through the explicit bias exercise together. You can have people do these on flashcards anonymously or write answers on a whiteboard or flipchart. Fill in the blank:

To maintain a safe space, have people write their answers on notecards and put them in a box instead of each person reading their answers aloud. Once all answers have been collected, the team leader can read each answer from the box. Remember, you will hear both good and bad answers. For a sales team, you might hear:

I was told the team hadn’t changed in 50 years.

People say the team is the most important part of the business.

I heard the team was unfriendly.

Next, ask people to identify their implicit expectations. This might take more time and definitely should be done anonymously with notecards. Fill in the blank:

When I come to work I expect to be bored.

I have learned to keep my personal and professional lives separate.

I assume all team members are incredibly loyal.

The goal for this exercise is to work together as a team to come up with alternative evidence for the negative beliefs and celebrate the positive ones. The positive beliefs should be written on a board, encouraged with high-fives and, ideally, be repeated.

The negative beliefs need to go through the final audit mentioned above. They need to be discussed, addressed, and fixed. This might happen over a few meetings, or during several one-on-one sessions. That’s good! Sometimes expectations can take time to eradicate, but it is worth the effort.

I hope this exercise has been powerful for you, and I can’t wait for you to do it with your team.