Why Do We Yawn? Learn the Surprising Science of Yawning 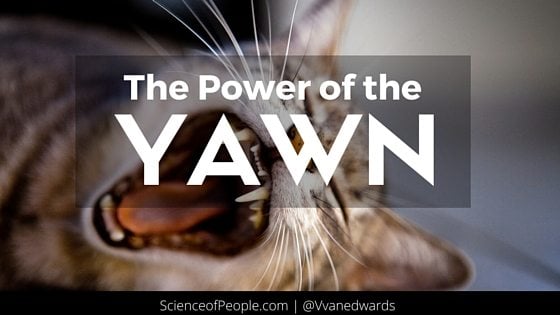 I have always been fascinated by yawning and what purpose it has to our bodily function, if any. Do we yawn out of boredom? Tiredness? Or some other reason? Yawning as a phenomenon has many people searching for the reasons of why we actually do it. In fact, the powerful contagious nature of yawning has puzzled researchers for decades.

Picture this, I was sitting in the Doctor’s office one day and it is all quiet with everyone trying to avoid eye contact. The person next to me opens their mouth as wide as it will go and sucks in the air, yawning. I didn’t see this person yawn but I still heard the distinctive sound and I soon realized that I couldn’t stop myself following suit. What trickery is this? In years gone by, this may even have been thought of as some form of witchcraft!

So the other night in my quest for answers, I was searching on TED for interesting talks. I was ecstatic to come across one that delved into the science on why yawns are so contagious! The speaker, Claudia Aguirre, gave some plausible explanations. I challenge you not to yawn the whole way through!

The main theories, given by Aguirre as to why yawning is contagious are:

This action is similar to the domino effect and how when someone nears you yawns, this triggers you to follow suit involuntarily. This is where my Doctor’s office example fits in, so in effect your yawn makes me yawn. An easy way to think of fixed action pattern is like a reflex. Once this reflex is triggered, it can’t be stopped. Like toothpaste, once out of the tube it cannot be put back! It is near impossible to stifle a yawn, have you tried?

This is also known as the chameleon effect. This copycat maneuver is unintentional and done without even knowing it and happens more so when there is a connection or bonding between you and the other person. For example, if you are sitting and chatting to a friend and they have their legs crossed then you may also find that you cross your legs without realising to mimic them. My grandmother used to tell me about an old wives’ tale that states that contagious yawning must mean that you like that person. Since Granny told me it must be true, right?!

Interestingly, scientists believe that this copycat yawning is possible because of some very special brain cells called mirror neurons. Mirror neurons, first found by neuroscientists in monkeys, are a type of brain cell that responds when we perform an action after seeing someone else perform the same action. This also relates to the power of mirroring, a subtle and unique  aspect of body language.

Is yawning indeed linked to empathy? In recent years, scientists have discovered a subset of mirror neurons that actually allows us to empathize with others at a deeper level. So according to this theory, you are actually empathizing with the yawner! Psychologist Steven Platek conducted a study at Drexel University in Philadelphia where he gave 65 students personality tests. These tests were to measure how well they responded to the mental states of the other people pointing out personality characteristics such as egocentricity, cold heartedness, callousness, Machiavellianism and impulsivity.

On the next stage of the study, Platek observed the students from behind a one-way-mirror to remain undetected. The students were asked to watch videos of other people yawning and the results were very interesting! The students who scored higher on empathy yawned more watching the video than those who scored lower on the scale. Delve deeper into the science behind this 2005 study.