Proxemics: How to Use the 4 Zones in ANY Social Situation

How good are you at using proxemics in your conversations and presentations? This guide is all about proxemics, examples, and their meanings.

Let’s start with a little test. Can you guess the four different proxemics zones?

Read down below to find the answers!

Here is the thing: Space matters.

My high school self thought I could avoid being awkward… by giving my final presentation like this:

Needless to say, it was even more awkward. I bombed the presentation. And my final grade.

No matter how good you are at body language, if you aren’t within the right distance you’re greatly weakening your impact.

Now that I’m done reliving a rather painful memory, I’m going to teach you how to master your 4 zones so you can have the best possible impact … and avoid any public-speaking backfires like I had.

Can You Read Body Language? (Quiz)

Proxemics is the amount of space people prefer to have when engaging in conversation with others. Anthropologist Edward Hall coined this word in the early 1960s and classified 4 major proxemic zones: the intimate space, personal space, social space, and public space.

Not everyone stands the same, so take into consideration a few key differences to really nail down your understanding of proxemics:

Contact cultures such as Latin American and Middle Eastern may prefer to be closer than noncontact ones like East Asian and American1 .

Country farmers and others in rural areas might prefer standing farther back.

City dwellers stand closer due to having less space.

Even time of day can affect space.

The first zone is the short space or the intimate zone, which ranges from physical contact to 18 inches.

What it Means: This distance is commonly used between lovers and other people who are close, such as family members and close friends.

It’s used during intimacy: Women seeking intimacy will often, whether they’re aware of it or not, step into this zone and step out again2. Men who receive this signal are then cued to step in to show mutual attraction.

It’s used during interrogations: Invading this space strategically can provoke anxiety and an adrenaline rush, providing enough pressure to get closer to a confession.

It’s used in sports: Teammates have much higher rates of touch than average friends. They pat each other on the back, head, butt,, and torso in gestures of congeniality. Team players also maintain smaller distances between each other. They stand close together, huddle on sidelines, and close talk much more comfortably than normal friends.

Otherwise, step too close and you might find others feeling very uncomfortable! 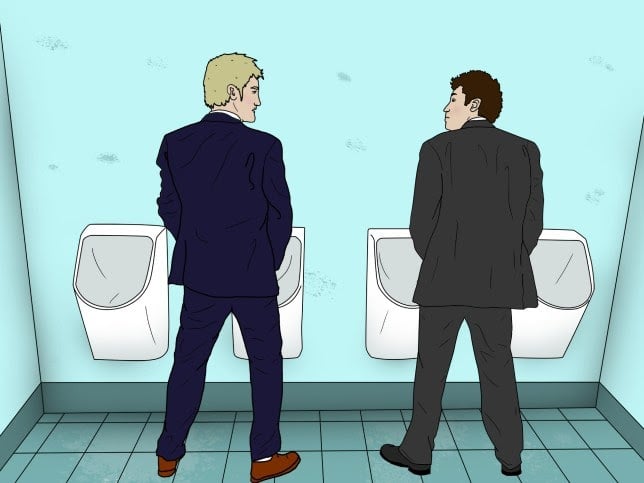 Overcrowding, like we see at some concerts and in large groups, can cause anxiety and mob mentality. You certainly wouldn’t want a stranger to invade your intimate zone. But there are a few exceptions.

Break one of these rules and you’ve just opened up a jar of awkwardness.

Some people are unaware of invading this space, but others do it purposefully. Like Donald Trump. He’s definitely not intimidated by other people around him, and his defensive bubble is so small it often invades other peoples’ intimate zone!

How to Use it: Close the distance between you and a romantic interest to increase attraction. In most other cases, avoid invading a person’s intimate zone. This might make people feel uncomfortable, such as going in for the hug when you are not on their close-friendship level yet.

A Presidential Invasion of Space

In the 2000 presidential debate between George W. Bush and Al Gore, Gore invaded Bush’s space in what he thought was a “power move.” Unfortunately for him, it just made him look like a bully. And really, really awkward.

But Bush’s reaction was on fire—he stopped talking, nodded his head toward Gore in recognition, and made everyone in the audience break out in laughter. This nonverbal “I see you!” was a great way to break the tension:

Personal space is usually between 1 and 4 feet. This is the best distance to create rapport and build relationships.

What it Means: It shows relationship status. People who have closer relationships will have a smaller personal distance. More dissatisfied husbands have been shown to choose greater conversational distance when speaking to their wives1.

Students given a negative comment before entering a room also sat further away from the experimenter1.

There are gender differences: Females often talk more closely with others than males do, as long as the conversations remain friendly or neutral1.Recent research has shown, however, that if a man and woman pass each other in a crowded shopping center, the woman will usually turn away from him as she pushes past, while the man will likely turn toward the female3!

In general, women are approached more closely than men1. One fascinating theory behind this is that men, as young boys, were given toys that take up a lot of space or encourage space. Think balls, cars, or trains. Girls, however, were given dolls and houses that take up less space1.

How to Use it: If you find yourself standing too far, try to close the distance without encroaching into the other person’s intimate zone. People who use closer distances during conversation are regularly seen as more warm, likable, empathetic, and understanding1.

Getting closer during business negotiations and when meeting new networking partners is a  great way to increase rapport.

But whatever you do, respect personal space! Standing too close to someone can make them truly uncomfortable, no matter how good your other body language is.

Standing too far can also be bad and may cause emotional disconnect. In the 1992 debate between George H.W. Bush and Bill Clinton, Clinton is asked a question from a person who is far out in the audience.

He cleverly remedies the problem of too much space by going right up to the speaker and trying to get as close as possible:

This makes a huge impact since she can see him closer and get a stronger emotional connection from him than when he was further away. George H.W. Bush didn’t get the same effect since he remained closer to his stool and away from the audience.

The Shake and Wait Approach

Navarro’s “Shake and Wait” approach can help you determine the appropriate physical distance in a conversation in 4 steps:

The waiting part is where the information comes out. Depending on what the other person does, you’ll know how they feel:

Want to know your social zone? Imagine you’re walking down the street and decide to ask someone for the time. Under normal circumstances, how far apart do you stand?

For most people, this distance is anywhere from 4 to 12 feet.

What it Means: Most strangers start off in this distance, and it’s often used during formal business and social events. Many people who you first meet might be in this distance.

How to Use it: This is a very neutral space and doesn’t really work well in terms of -building relations. If you find yourself in the social zone, try getting a little closer and gauging a person’s reaction. Are they receptive and warm, or do they immediately close off?

The Last to Enter

There’s an unwritten rule in the world of politics (don’t you just love politics?). The person that guides the others into a building is the “winner.”

Let’s watch this clip as 3 world leaders try to be the last person to enter the door. You can see a lot of wrestling, grabbing, and even pushing! People might view this as just a friendly bout, but nonverbally there’s an inner war going on between Palestine and Israel here (timestamp 1:02):

What it Means: Most likely, 2 people keeping public distance indicates complete strangers. There’s usually very little to no eye contact and physical touch in this distance. Unless you’ve got super arms like Elastigirl:

President John F. Kennedy was famous for his huge public distance area. Kennedy always had floods of people surrounding him, but oddly maintained a 30-foot empty bubble around him. According to National Geographic, people were nervous to get close and kept their distance instead.

Have you wondered what happens when you invade someone’s personal space? Check out YouTuber BigDawsTv’s social experiment where he gets up close and personal:

Side Note: As much as possible we tried to use academic research or expert opinion for this master body language guide. Occasionally, when we could not find research we include anecdotes that are helpful. As more research comes out on nonverbal behavior we will be sure to add it!

1 reply on “Proxemics: How to Use the 4 Zones in ANY Social Situation”