Trump to Truman: An Analysis of 20 Presidential Inaugural Speeches 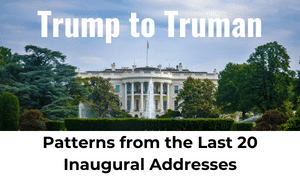 How is your presidential knowledge? For example, can you guess:

In our human behavior research lab we analyzed these and other traits in the last 20 presidential inaugural addresses, Truman through Trump. Were there differences in body language, verbal patterns and persuasiveness in each inauguration speech?

#1: Which president used the most hand gestures in his inaugural address?

Hand[iii] gestures are an important mark of charisma for political candidates. We recorded both the number of hand gestures as well as the specific gestures themselves. Presidents most frequently use the thumbs-up gesture, pointing and open palm gestures. The president who used the most? That would be … 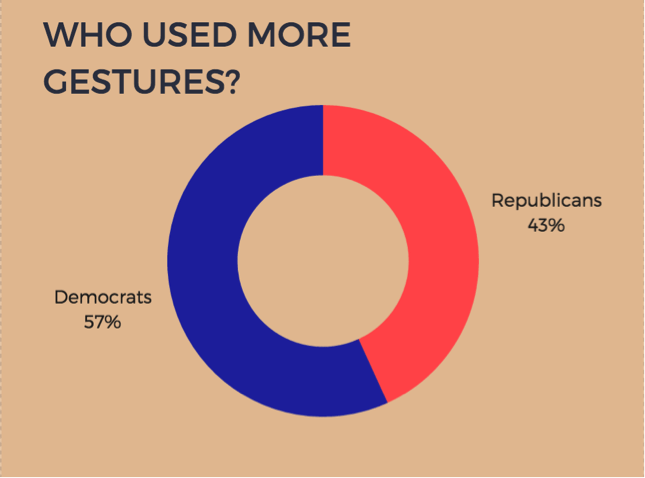 #2: Which president smiled the most in his inaugural address?

Smiling can be a signal of optimism, warmth and openness. Which president smiled the most? And which is the happier party? Based on smiles, here’s what we found:

#3: Which president had the longest inaugural address?

a. Jimmy Carter
b. Dwight D. Eisenhower
c. Harry S. Truman
d. George W. Bush
Who spoke the longest? That would be… 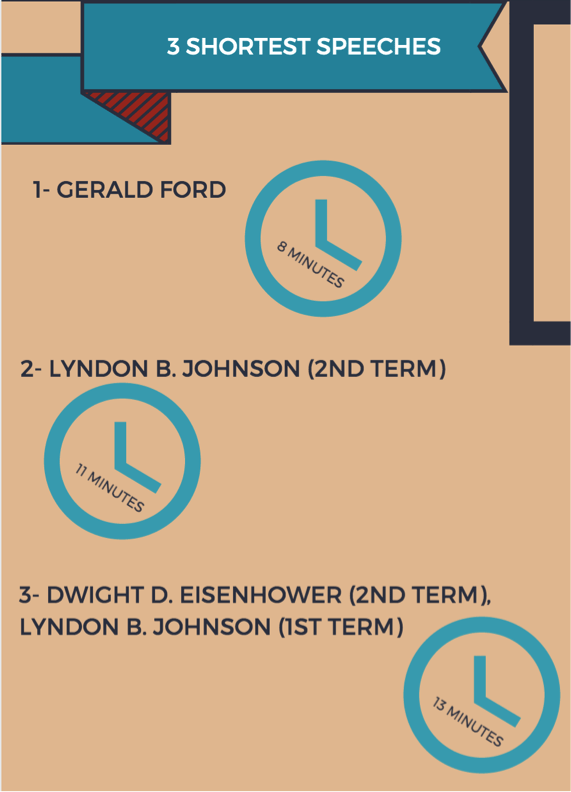 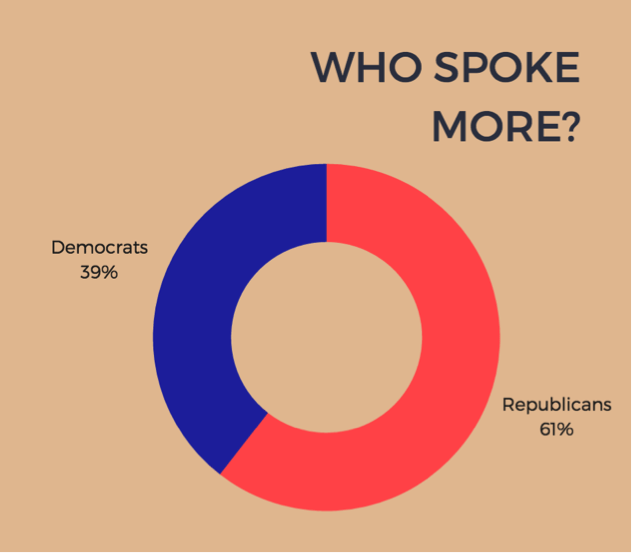 Want even more on the science of nonverbal cues and how they influence our perceptions? Check out our book, Captivate! 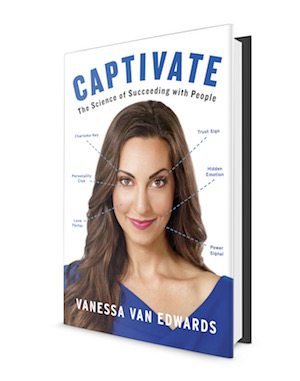 #4: Which tie color is the most popular in inaugural addresses?

We were curious about tie color, shirt color and suit color. The shirt color data was a dud—every president in this sample wore a white shirt. Which tie color is the most popular? Here’s the breakdown: 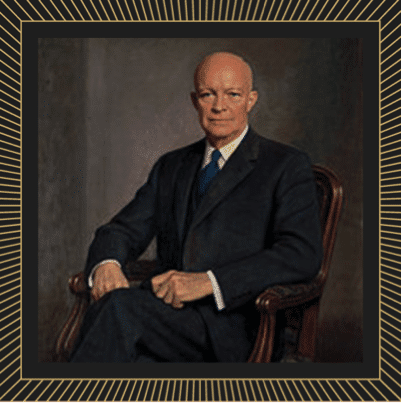 #5: Which president had the worst weather during his inaugural address?

We were curious about who had the best and worst weather days. Who had bad luck?

#6: Which president used the most pride poses in his inaugural address? 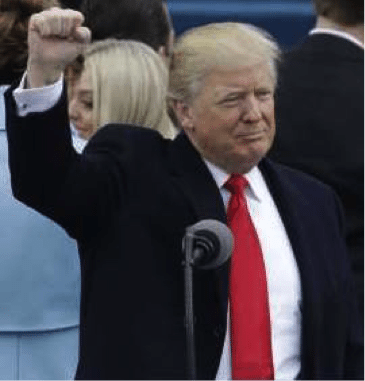 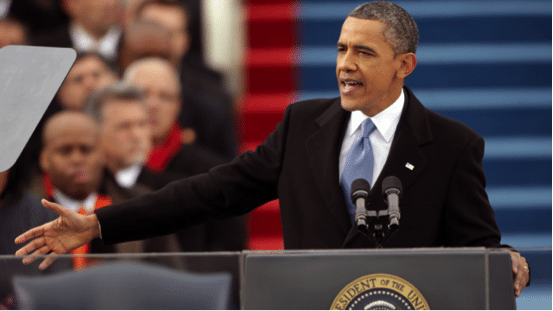 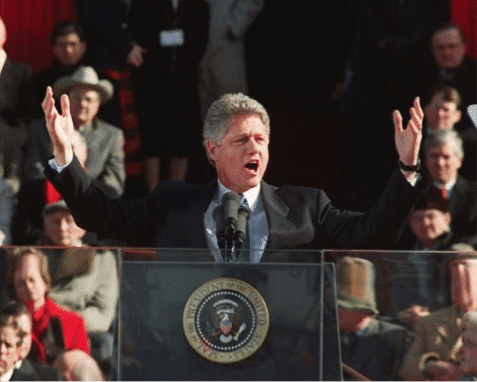 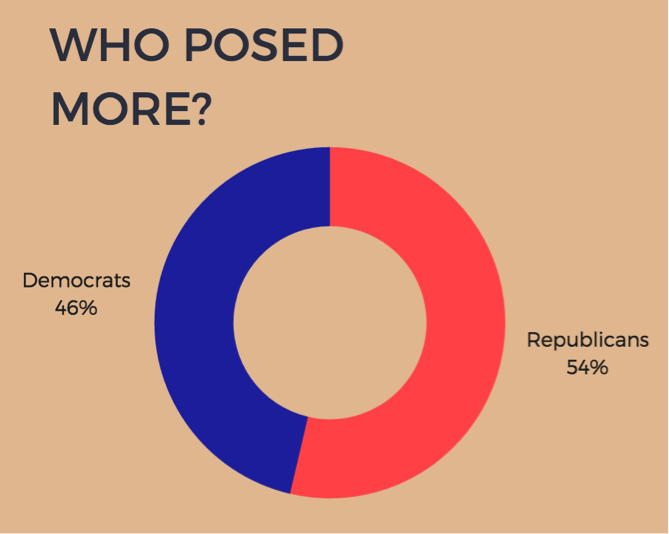 #7: Which president used the most emotional language in his inaugural address?

Emotionally charged language, imagery and metaphors activate audiences’ emotions to help them feel personally invested in the message. The president who used the most? That would be… 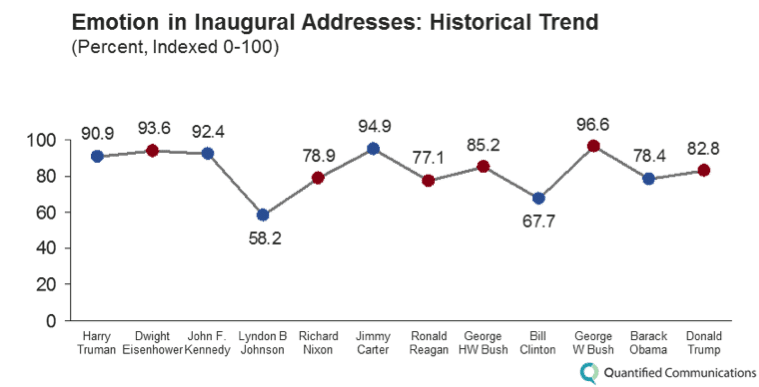 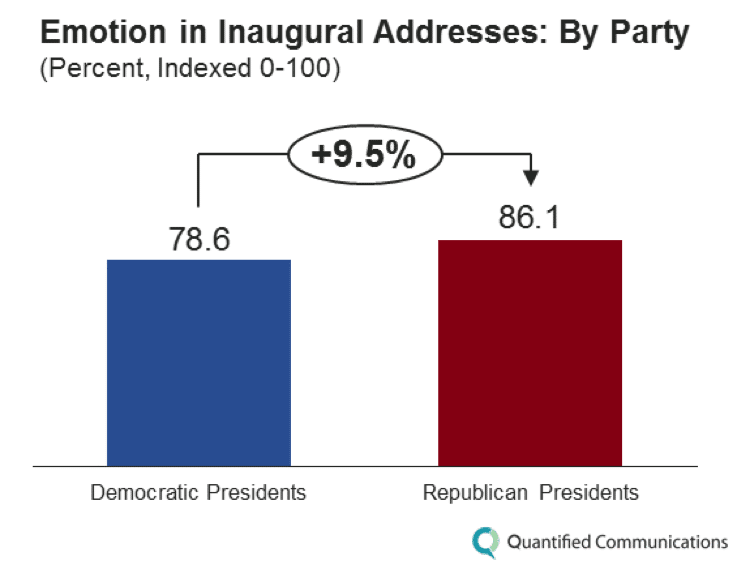 Here is a great example of emotional language from George W. Bush:

“By our efforts we have lit a fire as well; a fire in the minds of men. It warms those who feel its power. It burns those who fight its progress. And one day this untamed fire of freedom will reach the darkest corners of our world.”

#8: Which president used the most logic in his inaugural address?

Some presidents appeal to logic more than others. Speaking with logic is when a president uses language establishing research and proof or cites data and statistics to support their arguments. The president who used the most logic? That would be… 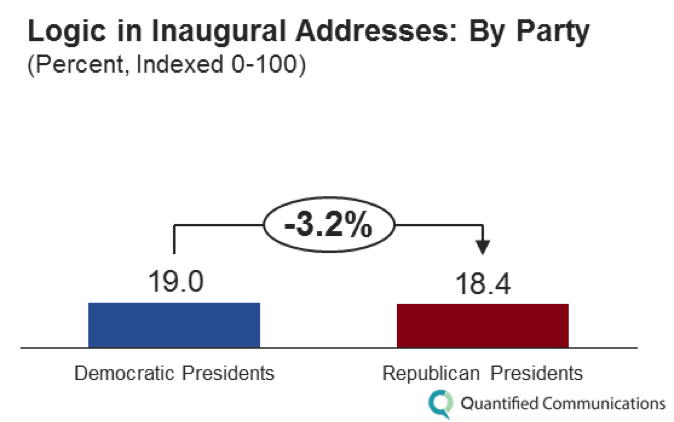 A great example of using of logic is from Harry S. Truman:

#9: Which president used the most negative language in his inaugural address?

The use of negative or positive language in an inaugural address can indicate a president’s perspective. Which president used the most negative language? That would be… 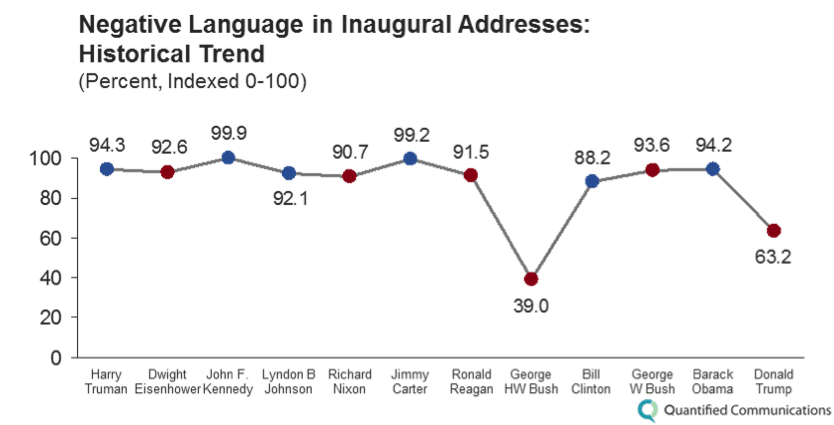 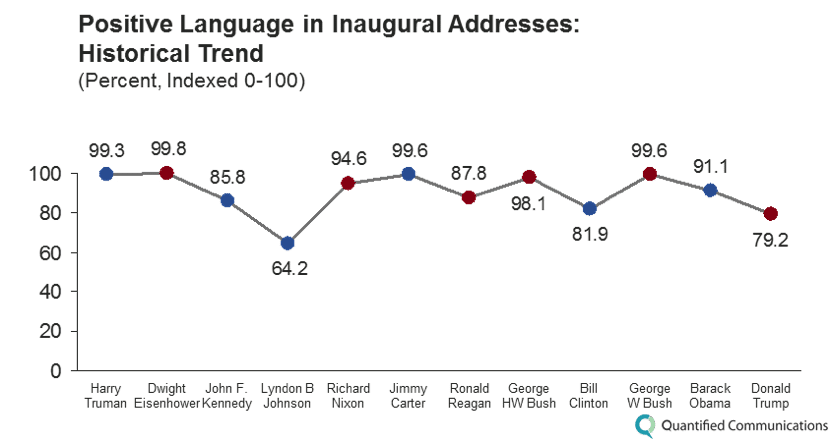 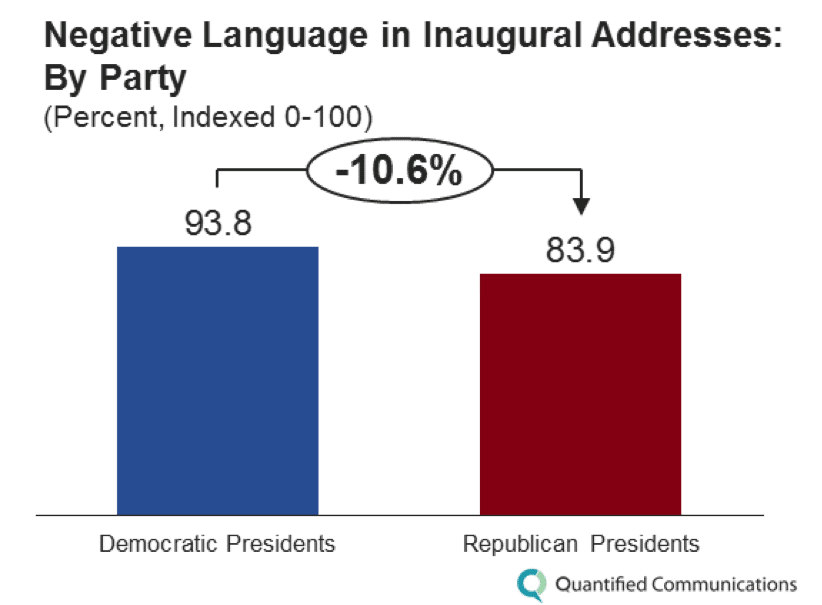 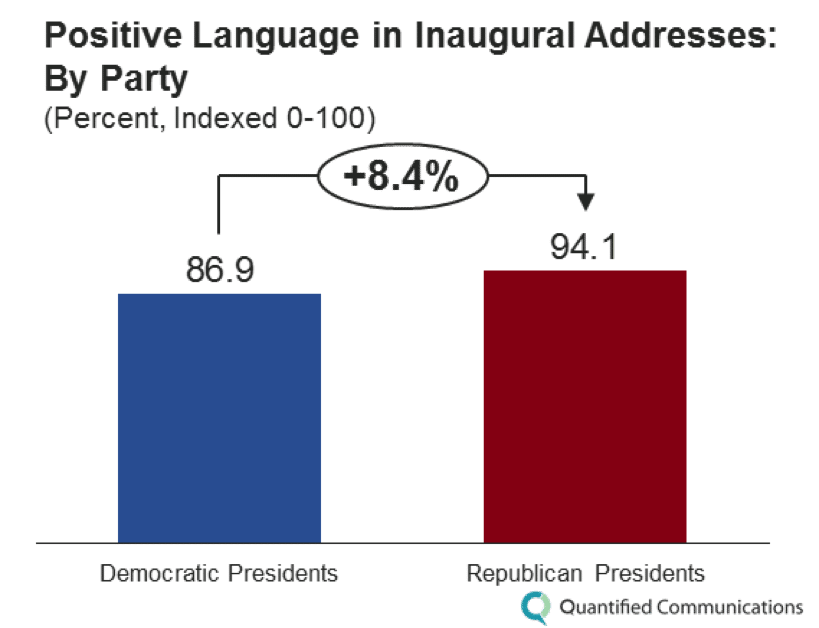 Here is an example of negative language use:

“To those people in the huts and villages of half the globe struggling to break the bonds of mass misery…Finally, to those nations who would make themselves our adversary, we offer not a pledge but a request: that both sides begin anew the quest for peace, before the dark powers of destruction unleashed by science engulf all humanity in planned or accidental self-destruction.”

Compared to a positive example:

“In the light of this equality, we know that the virtues most cherished by free people — love of truth, pride of work, devotion to country — all are treasures equally precious in the lives of the most humble and of the most exalted. The men who mine coal and fire furnaces, and balance ledgers, and turn lathes, and pick cotton, and heal the sick and plant corn — all serve as proudly and as profitably for America as the statesmen who draft treaties and the legislators who enact laws.”

We also found that all but one two-term president used more positive language in his second-term inaugural address – the same happened with increased smiling in second-term speeches.

Presidents definitely feel more optimistic going into their second term—at least that is how they come across.

#10: Which president used the most individualistic language (“I, me and my”) in his inaugural address?

Which president used more I, me and my? That would be…

This again points to the idea that Republicans tend to emphasize the individual, where Democrats tend to focus on fostering more community. 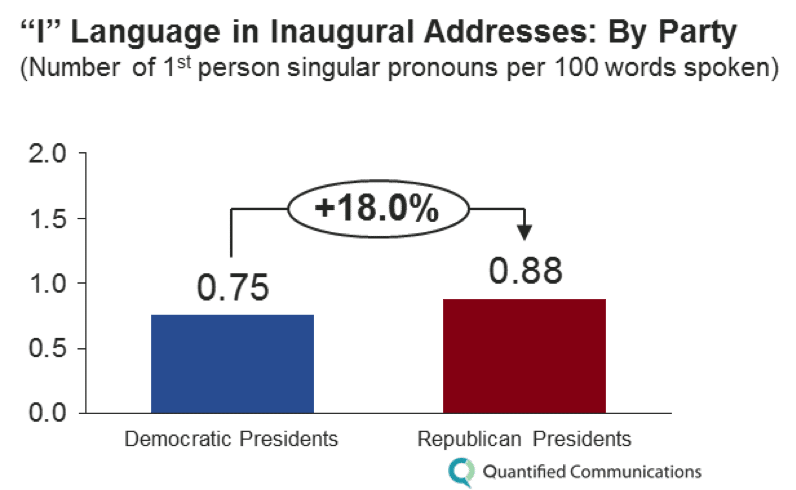 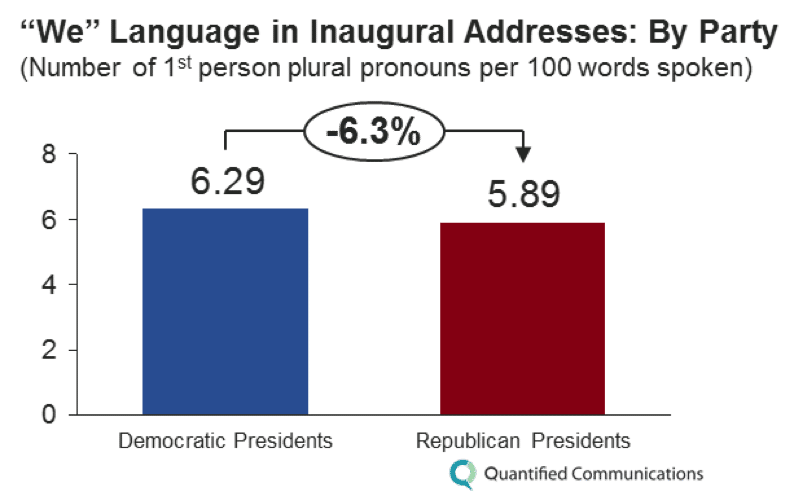 Here is an example of frequent personal pronoun use:

“For the more than 30 years that I have served this nation, I have believed that this injustice to our people, this waste of our resources, was our real enemy. For 30 years or more, with the resources I have had, I have vigilantly fought against it. I have learned and I know that it will not surrender easily.”

And example of frequent third person pronoun use:

“We cannot dwell upon remembered glory. We cannot afford to drift. We reject the prospect of failure or mediocrity or an inferior quality of life for any person. Our Government must at the same time be both competent and compassionate. We have already found a high degree of personal liberty, and we are now struggling to enhance equality of opportunity. Our commitment to human rights must be absolute, our laws fair, our national beauty preserved.”

#11: Which president used the most storytelling language in his inaugural address?

Storytelling can be a very persuasive way of speaking, which appeals to a broader audience than just using logic or data. It is also a more emotional appeal to listeners than statistics alone. How did the presidents compare? 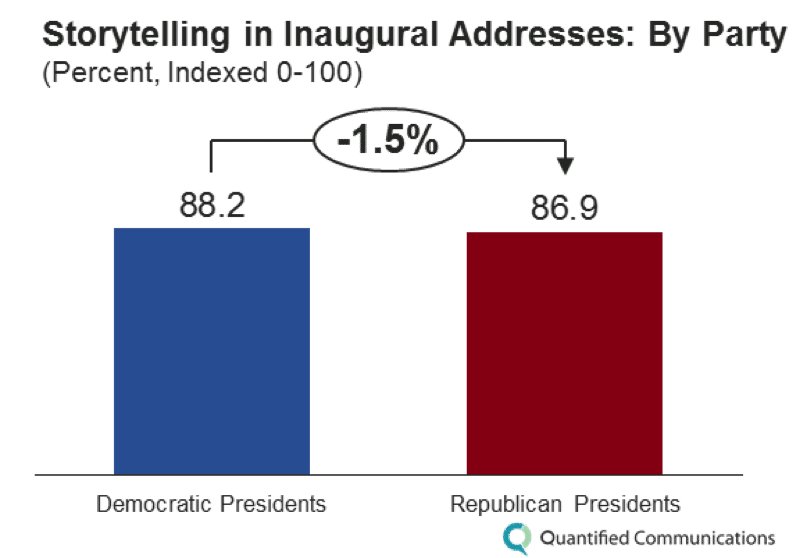 “For every generation there is a destiny. For some, history decides. For this generation the choice must be our own. Even now, a rocket moves toward Mars. It reminds us that the world will not be the same for our children, or even for ourselves in a short span of years. The next man to stand here will look out on a scene that is different from our own.”

#12: Which president used the most trustworthy language in his inaugural address?

Quantified Communications defines trustworthy language as “The linguistic patterns in a speech or written document that are proven to inspire audiences to trust the communicator.” They have found that these language patterns that can help speakers gain trust include insights behind stated goals, directness of language, demonstrated accountability, and a balanced emotional tone. Which president conveyed the most trust in his words? That would be… 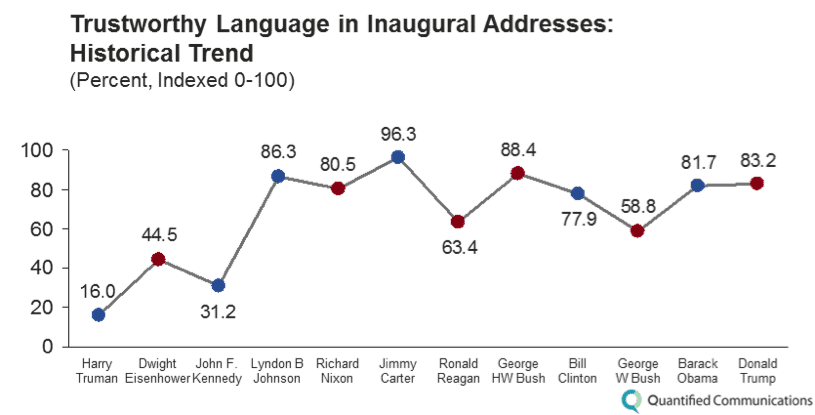 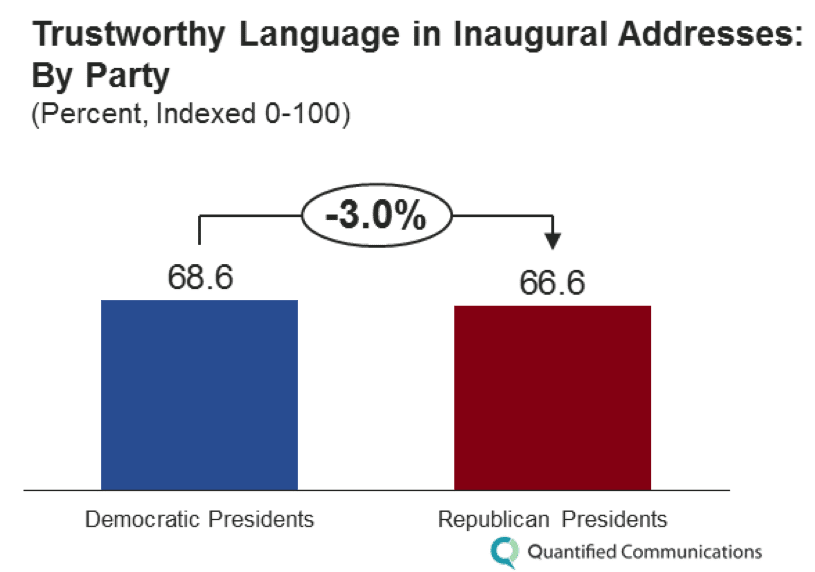 An example of trustworthy language:

“I have no new dream to set forth today, but rather urge a fresh faith in the old dream. […] You have given me a great responsibility — to stay close to you, to be worthy of you, and to exemplify what you are. Let us create together a new national spirit of unity and trust. Your strength can compensate for my weakness, and your wisdom can help to minimize my mistakes.”

#13: Which president had the most clarity in his inaugural address?

A speaker’s clarity means how easy their content is to follow and understand. Who was the clearest? That would be… 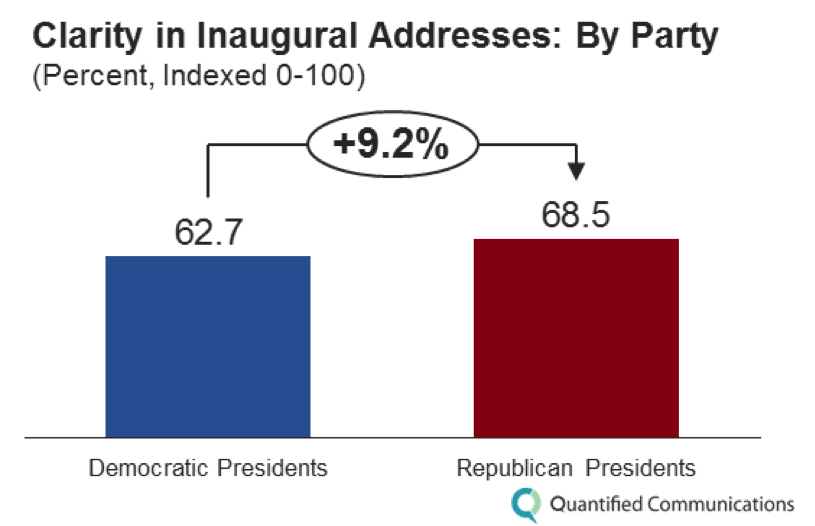 “We know what works: Freedom works. We know what’s right: Freedom is right. We know how to secure a more just and prosperous life for man on Earth: through free markets, free speech, free elections, and the exercise of free will unhampered by the state.”

It is clear both parties have patterns. Republicans tend to use more emotional language, more stories and intense words (both positive and negative). Democrats love data and logic. They are more likely to use neutral language.

Our presidents who used nonverbal communication the most also have been our more recent ones–Donald Trump and Barack Obama smiled and used the most hand gestures.

Some findings surprised us, especially which presidents used more data and negative language. Many viewers believed Donald Trump’s inaugural address was one of the most negative we have heard in recent years. And here is where there is a special wrinkle in the data. Use of negative language was measured by frequency, not degree. Trump might have had less negative language overall, but when he was negative, he did not hold back.

We examined the verbal and nonverbal patterns of all 20 presidential inaugural addresses given since Harry Truman’s in 1949.

Looking at 13 different metrics for each address, we found interesting nonverbal and verbal patterns. For the verbal metrics, we partnered with Quantified Communications to use their communication measurement platform to analyze the transcript of each speech.

Our next steps will be to look at any correlations between starting approval rating and inaugural address patterns. Let’s see what we find next!

Vanessa Van Edwards is a behavioral investigator and published author. She figures out the science of what makes people tick at her human behavior research lab, the Science of People. As a geeky, modern-day Dale Carnegie, her innovative work has been featured on NPR, Business Week and CNN.

Quantified Communications is our analytics partner. The QC platform, built on years of scientific communication research, uses a combination of natural language processing, automated vocal analysis, and insights from a panel of Ph.D.-level communication experts to help the leaders across the globe measure and improve their communication. QC’s work has been featured on WSJ, Business Insider, Forbes, and the TED mainstage.

[i] Greatness in the White House: Rating the Presidents, Washington through Carter,” (Pennsylvania State University Press, 1988).