8 Fun Meeting Icebreakers to Warm Up Any Meeting 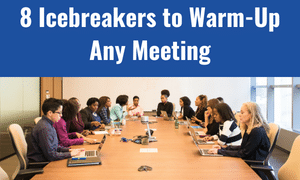 When most people hear the word ‘icebreaker,’ they think of boring or silly ”bonding exercises.” In this post, I want to share 8 Meeting Icebreakers that are:

If you are a meeting planner, team leader, or event organizer, you MUST watch this video.

If you’ve ever attended a meeting, you must SEND this video to your meeting planner. I’m going to convince you to upgrade the age-old icebreaker.

I host hundreds of meetings every year, from conferences to sales team retreats. One thing I’ve learned is that an icebreaker truly can make or break an event. Here’s the crazy science on this:

The results were clear. The teams that did the icebreaker before the scavenger hunt got the most selfies, had the shortest completion times, and reported liking each other more in the post-event survey. This is incredible! A couple of foot stomps, a few claps, and a cliché cheer improved performance, time, AND likeability.

Warm-ups and icebreakers can make a difference.

This is my favorite icebreaker, because you combine easy bonding with the best possible ingredient–sugar! To coordinate this icebreaker, pick your favorite kind of multi-colored candy – a bowl of M&Ms, Starbursts, Skittles or whatever tickles your fancy. Next, pass around the bowl and ask people to take as many candy pieces as they like, but NOT to eat them. Once the bowl of candy has been passed around, each person has to answer a question for each color they take. For example, you can assign questions such as:

Orange: What’s the best vacation spot you have ever been to?

Green: What TV show are you addicted to?

Brown: If you could have any superhero quality, what would it be?

Yellow: What’s the best part of your work week?

Icebreaker #2: Two Truths and One Lie

I love the game “Two Truths and One Lie,” because it allows you to get a little more creative with your teams and to have some fun. Start by asking each person to come up with two facts about themselves and one believable fib. Next, everyone shares their three statements and the group votes or discusses their guess for the lie. For example, here are three statements about me.

Can you guess which is the lie?

I do not have a pet turtle! Yes, my family called me ‘Sasa’ because my little sisters couldn’t say ‘Vanessa.’ And I lived in China during college. Fun facts, right? This icebreaker is a great way to get to know each other, and to have some laughs along the way.

Special Note: If you have introverts in the group, it’s nice to let the group know ahead of time that they should think of two truths and one lie for the meeting. This is helpful for not putting people on the spot.

I love this icebreaker because it is more hands-on. Pass out different colored sheets of paper to each person attending the meeting. Then ask everyone to write an interesting fact about themselves on the piece of paper and fold it into a paper airplane. Then everyone  launches their paper airplane to somewhere around the room. Then everyone retrieves one of the paper airplanes, reads the fact, and guesses whose paper airplane they got. It’s fun to guess and you learn new things about each other.

If you want people to get out of the office, you also can have your icebreaker be a mini scavenger hunt. It can be around town, around the office, or around the building. Just like in the experiment I explained in the beginning of this article, give small groups a list of locations and have them take as many selfies as they can in the allotted time. For this one, you should have a prize ready for the winning team.

Icebreaker #5: Year of the Coin

Have a bowl of coins sitting at home? Perfect! They are great for icebreakers. Sort through the bowl to make sure you don’t have any coins that are too old, then have everyone pick a coin out of the bowl. Go around and ask each person to share something they were doing the year the coin was minted. This is great for getting to know someone’s past—and test their memories.

In small groups, you can use great questions to get people to open up. Get a large bowl and cut up a list of conversation starters. Have everyone go around and pull one out and answer it. If they don’t like a question, they can draw another and try one more time! I have a list of my favorite 33 conversations starters you can use.

A speed networking session doesn’t just have to be for networking or new people. It also can be for groups that want to get to know each other. You even can do this with a large group of people, as long as you have a big open space. Set a timer for two minutes. Ask everyone in the room to find a partner. Turn on the timer  and give everyone a conversation starter to answer. Each person has one minute. After both people have answered and the two-minute timer is up, have them find a new partner and assign them a new conversation starter. You can do as many rounds as time allows. If you have a small group, you can make sure everyone in the room gets at least one turn with each other.

These are my favorite icebreakers, and they work for different-sized groups. When thinking about having a successful meeting or retreat, we often think about the basics, such as a strong agenda, a yummy lunch, and planning. These are all good strategies, but don’t forget about the professional warm-up. A good icebreaker can break the tension, break the awkwardness and, of course, break the ice.

PS- Here are some more ideas for icebreakers in case you need them!