We were all shocked to find out that Lance Armstrong had been involved with illegal substances throughout his seven Tour De France wins. His interview with Oprah, sadly, showed more anger, pride and defiance than sadness and regret.

Overall, he did show some nerves, but very little sadness—which is the emotion he should have been feeling if he was truly sorry for his cheating and lying. He also showed anger at the accusations, contempt at the questions, and defiance, which leads me to believe that he still thinks his actions were justified.

Let’s look at Lance Armstrong’s specific body language and microexpressions throughout his first interview with Oprah to see what he was really feeling.

Oprah then asks him if he believes you need banned substances to win the Tour De France. He says yes and then smiles. This is a clear explanation about why he was angry at the EPO question–he believes you need to dope to win. Immediately following the smile, he shows contempt. Again, he is irritated that he is being asked these questions.

Not only are sadness and sorrow missing throughout the interview, his body actually shows dominance. For example, he is seated in the open leg cross. This is the position Western cowboys sat in–it signifies confidence and aggressiveness. It also takes up more physical space than sitting in a neutral position or a closed cross, which is a way to claim territory.

Another prideful gesture is when Armstrong refers to himself in a traditional ‘chest pound’ which only confident, alpha males do. If he felt bad for his actions, he would not be showing such dominant behavior.

Oprah asks Armstrong about why he has been telling lies up until now. Armstrong says, “This story was so perfect for so long.” And then shows a small smile, which is also known as duping delight. It pleases him that he got away with the story for so long and he liked it when it was perfect–of course, he was doping, winning and getting away with it. 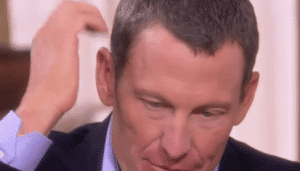 When Oprah asks Armstrong, “How did it all work?” He pets and scratches his head for longer than needed. This is one of his few signs of nerves. Petting or scratching the head is a nervous and self-soothing gesture. Like a parent pats a child’s head before bed, we do this to calm ourselves down. I think he was nervous about answering this question–whether because he is ashamed or still hiding something, I think is answered a little later in the interview.

I do not believe that Armstrong feels remorse or guilt for his doping. Not only does he say in the beginning that he believes you need the drugs to win, but when he says to Oprah, “My cocktail was only…” Using the word only implies he still does not think that what he did was that bad. He also flat out says he justifies taking testosterone because of his cancer.

The final evidence for Armstrong’s lack of remorse is when he is explaining the ‘generation of doping’ and says, “I didn’t create it, but I didn’t stop it. And that’s what I have to feel sorry for,” and then does a one sided shoulder shrug–one of the most typical body language leaks of liars. I do not believe he feels sorry at all.

4. Anger and Holding Back

Throughout the interview, Armstrong purses his lips together and raises his chin. This has a double meaning: first pursing your lips usually means you are withholding information. Since I believe Armstrong feels justified in his actions, I believe he is holding back all of his justifications for what he did. And the chin raise is part of the microexpression for anger. (see my guide to microexpressions)I think he is angry that he has been caught and having to answer the questions.

The one time I think Armstrong shows shame is when he is talking about suing people who he knew were telling the truth. Not only does he touch his face much more during this segment–a self comforting gesture we do when we are nervous, but he also uses distancing language because I think he is ashamed. He says, “It’s a major flaw. It’s a guy who expected to get whatever he wanted and to control every outcome.” He refers to himself in the third person because I think he is ashamed he did it and wants to distance himself from those actions.

Lance Armstrong’s body language does not match his verbal content. I think his lies caught up to him and he is confessing and saying sorry because he has to. Stay tuned for my analysis of the Part II of the Oprah / Armstrong interview.

Learn the 5 scientifically proven steps to being a lie detector in our online training. Never miss a lie again. You’ll be able to spot deception and uncover hidden emotions, and unlock the secret language of lies.