5 Secrets of a Successful TED Talk

What makes a successful TED Talk?

Here at the Science of People we endeavored to find out. Why do some TED Talks rack up millions of views, change lives and are talked about everywhere?

All TED Talks are good. Why are some great?

We set out to answer this question with one of our first crowd-sourced Citizen Science projects. Over the last year, we had 760 volunteers rate hundreds of hours of TED Talks looking for patterns.

We were amazed at what we found. Before I get into the 5 patterns, I want to give you some juicy background:

A few authors have aspired to take on the puzzle of what makes a successful TED Talk. Here’s what’s different:

TED is a non-profit that posts videos of the people with the best ideas presenting on a variety of fascinating topics. This gave us the perfect database of videos of charismatic and intelligent people. Most importantly, the number of views on each video gave us a clear idea of popularity. For example, here are two amazing Talks on leadership: one by Fields Wicker-Miurin called “Learning from Leadership’s Missing Manual” and one by Simon Sinek called “How Great Leaders Inspire Action”. Note the difference in views: 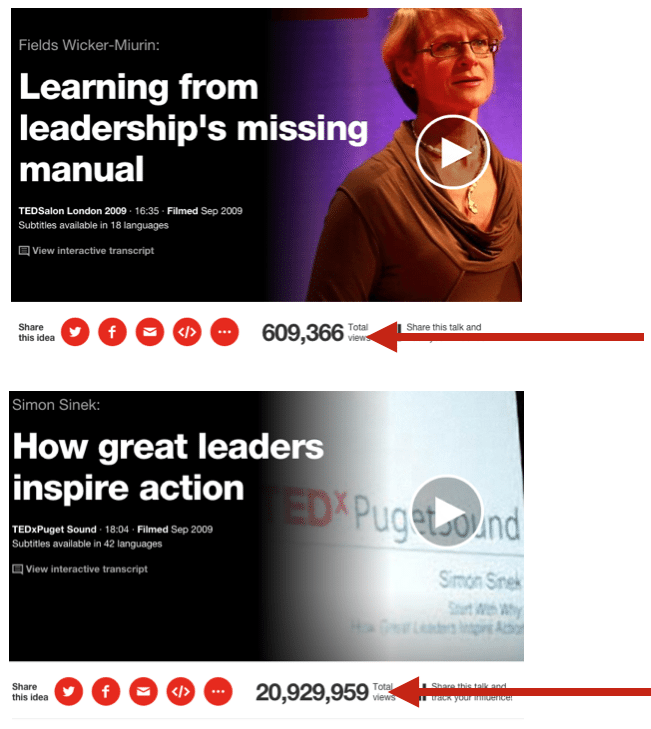 Something about Sinek’s Talk caught fire, captured people and went viral. We see this pattern over and over again on TED. Some Talks hit big and some don’t. But, why?

While we examined TED Talks in this experiment, the implications are wide reaching. We are talking about how to increase your charisma, presence and the personal power from a stage, in board rooms and when interacting with people.

We believe these 5 patterns show us how to be an influencer.

The 5 Patterns of Popular TED Talks:

These results surprised us. The most pleasant surprise was that these tips are extremely easy to implement for everyone in daily life. Here’s what we found and how you can use the tips:

People liked the speakers just as much with sound as on mute.

This means we rate someone’s charisma, credibility and intelligence based on nonverbal signals. This is surprising–we want people to focus on our words, but this experiment is no different from previous research. Over and over again we find that how we say something is more important than what we say. The question then becomes, how do we say something well? Read on to find out which nonverbal signals were most important…

Once we realized the importance of the TED speaker’s body language, we decided to look for specific nonverbal patterns that the top TED Talks had different from the bottom TED Talks. One thing became quickly clear:

Why do we think this is? Our hands are a nonverbal way to show and build trust–studies have found that when we see someone’s hands, we have an easier time trusting them. Also, when someone uses their hands to explain a concept, we have an easier time understanding them. Speakers who use hand gestures are speaking to their audience on 2 levels–verbally and nonverbally.

Nonverbal communication isn’t just about body language, it’s also about vocal cues. We had our evaluators rate the TED speakers on vocal variety, or the amount of fluctuation in their voice tone, volume and pitch. Again, the relationship was clear. The more vocal variety a speaker had, the more views they had. Specifically, vocal variety increased the speakers’ charisma and credibility ratings. In other words, speakers who told stories, ad libbed and even yelled at the audience like Jamie Oliver in his TED Talk, captivated the audience’s imagination and attention.

Researchers who have studied teacher ratings have also found that vocal variety is important for improving student evaluations (See Rocca, K.A.). When you are practicing giving your elevator pitch or your next presentation, try saying your words at least 5 different ways. Practice putting emphasis on different words, slowing and speeding up your pace and varying your volume on important points.

Loving this research? Tell me!

This finding is the only pattern that goes against the current research. Studies on smiling have found that leaders typically smile less. Nonverbal scientists believe that smiling is actually a low power behavior. However, in our research we found that the longer a TED speaker smiled, the higher their perceived intelligence ratings were. Those who smiled at least 14 seconds were rated as higher in intelligence than those who smiled for less. Doesn’t this seem counter-intuitive? When we think of an intelligent person, we usually think of someone very serious. But even when TED Talkers were speaking about a serious topic, like Sheryl Sandberg’s Talk on women leaders, smiling still helped her intelligence ratings.

We can’t emphasize enough the power of the first 7 seconds of any interaction you have. According to our ratings, people had already made their first impression and decision about the entire Talk in the first 7 seconds of the video. Researcher, Nalini Ambady calls this ‘thin-slicing.’ She says that for efficiency purposes, the brain makes very quick judgments of people within the first few seconds of meeting them. Typically, this happens before any words are exchanged. So yes, think about your opening line, but also think about how you take the stage, how you acknowledge the audience and how you deliver your first line.

Want to learn more about how to captivate people like these famous TED Talkers? Check out my latest book, Captivate:

I hope this research has shed some light on what makes someone charismatic and how you can improve your own stage presence. Whether you are going to deliver the next top TED Talk or you just want to make an impact in your daily life, take these 5 easy cues and make them your own.

More About the Experiment:

Previous research by Nalini Ambady suggested that we decide if we like someone in less than 7 seconds. We wanted to know if there was a difference for people who watched an entire 18 minute Talk versus people who watched just the first 7 seconds. Here is an example of the 7 second trial where participants watched a video like this and filled out a rating chart for charisma, credibility and intelligence as they watched:

Here’s what fascinated us at this point: All of the ratings matched the number of views. In other words, the Talks that got the most views were also the Talks that got highest ratings in credibility, charisma and intelligence whether or not people only watched 7 seconds or on mute. As we explain in our 5 patterns:

Our research suggests that we decide if we like the TED Talk in the first 7 seconds–and it has very little, if nothing to do with the words.

Finally, we started to look for nonverbal patterns between the videos that ranked high in charisma, credibility and intelligence. We felt since the results of Part I and II pointed us in the direction of nonverbal, that’s where we would focus. Additionally, most of the previous research has been done on the verbal side of TED Talks, but very little on the nonverbal side.

We also found that some nonverbal gestures were more important than others:

We only examined 50 TED Talks for these patterns, but it proved interesting nonetheless:

There is a lot more research that could be done in this area. We could look at differences between men and women, across races and locations. It would be wonderful to compare these results to different years and see if that changes results. However, this preliminary research is helpful, inspiring and fascinating. What we perceive to be important about public speaking, charisma and presence and what is actually important might differ more than we think.

Vanessa Van Edwards is a behavioral investigator and published author. She figures out the science of what makes people tick at her human behavior research lab, the Science of People. As a geeky, modern-day Dale Carnegie, her innovative work has been featured on NPR, Business Week and CNN.

Brandon Vaughn is our Chief Data Scientist at the Science of People. While moonlighting with us, he spends his days working with data at Apple and running his podcast, First Things. He is a whiz with numbers and loves finding patterns in big data.

Thank you to all of the amazing Science of People friends who voted, watched and rated these videos. We could not have done this amazing experiment without you.

Thank you to TED for bringing together the people with the best ideas and sharing the knowledge with all of us.

Thank you to all of the TED speakers for speaking out, sharing your voice and letting us learn from you.

Did you love this article? We have more insider TED secrets  for you to check out in our newest book Captivate! 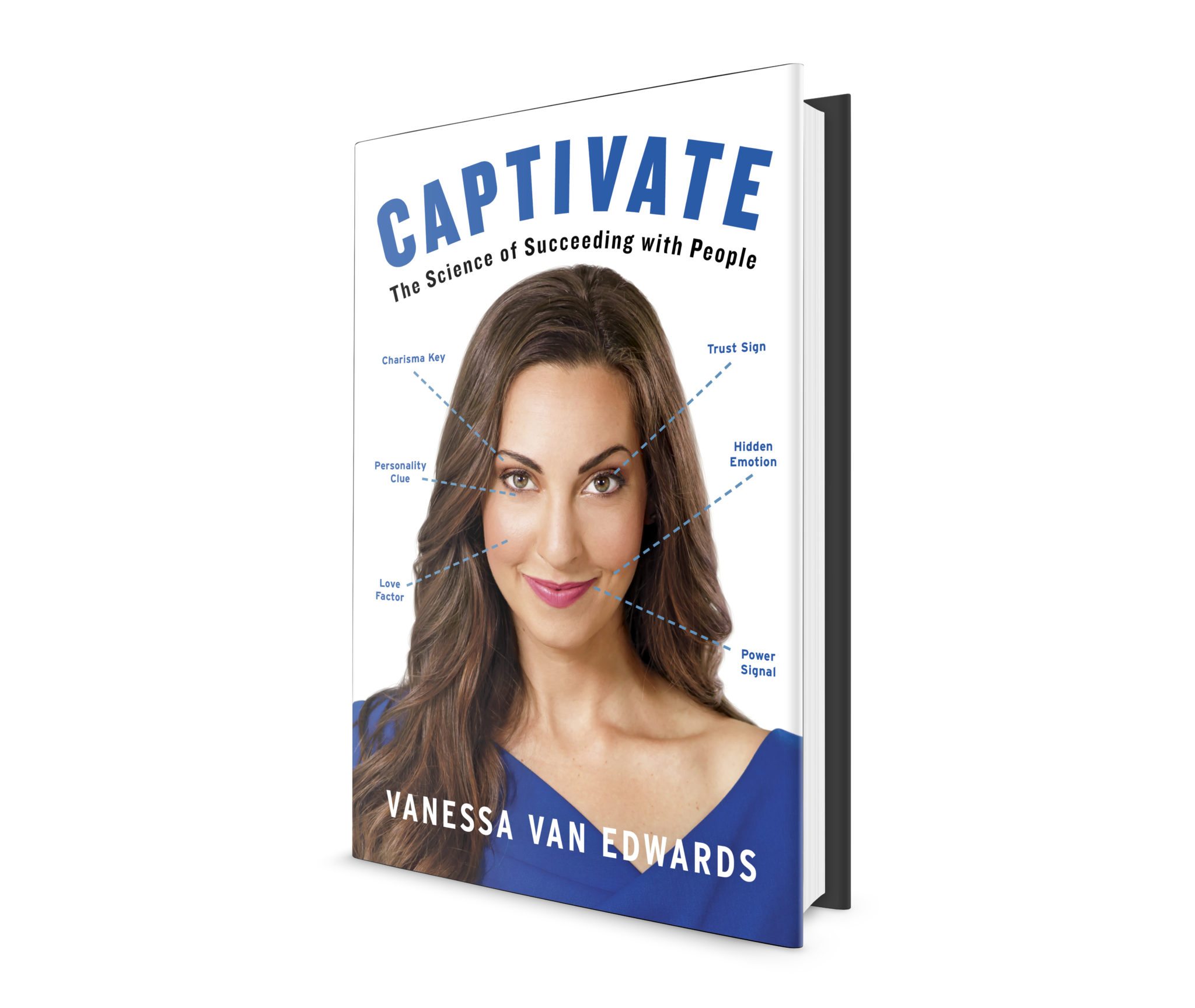 Do you wish you could decode people? Do you want a formula for charisma? Do you want to know exactly what to say to your boss, your date or your networking partner? You need to know how people work.

As a human behavior investigator, Vanessa Van Edwards studies the hidden forces that drive our behavior patterns in her lab—and she’s cracked the code. In Captivate she shares a wealth of valuable shortcuts, systems and behavior hacks for taking charge of their interactions at work, at home, and in any social situation. These aren’t the people skills you learned in school. This is the first comprehensive, science backed, real life manual on human behavior and a completely new approach to building connections.