3 Ways to Instantly Tell When Someone is Attracted to You

“How do I know if someone is attracted to me?” I get asked this question all the time and I get it, wondering if someone is interested in you can be super nerve-wracking. Whether or not the attraction is mutual, being uncertain about what type of relationship you have with someone is a recipe for awkward situations.

I want to save you from the awkwardness of unknown attraction.

Here are three scientific clues that someone is attracted to you:

They Enter Your Personal Bubble

People are physically drawn to those they are attracted to. While someone who feels friendly or indifferent toward you typically will remain two to ten feet away, someone who is attracted to you will get much closer.

There are three ways people will enter your personal bubble:

I often see this when a date at a restaurant is going well.  Both people will lean over the table to get as close as possible. Likewise, people who just met at a bar will move progressively closer to one another if their interaction is going well.

If you suspect someone might be attracted to you, observe how close they position themselves near other people and compare that to how they behave around you. The more dramatic the contrast, the greater the chance they are attracted to you.

You Can Feel It

Literally. This one is probably a no-brainer; when someone is attracted to you, they want to touch you. Touch releases the bonding hormone oxytocin. So, it is an instinctive way of trying to strengthen your connection.

However, not all touches mean the same thing. Some people naturally are driven to engage in more touching than others, which is why the type of touch matters just as much, if not more, than the quantity.

This is why handshakes are considered a professional touch, while people rarely put their hand on the lower back of someone they don’t have a personal relationship with. So, if someone increases the intimacy of their touches, it’s a sign that they feel comfortable around you and want to get closer.

Watch for Their Eye Gaze

Like touch, eye contact triggers the release of oxytocin. When someone is attracted to you they subconsciously will try engaging in lots of mutual eye contact. They do this both to feel closer to you and because they are interested in you and what you are saying.

You have to keep in mind, though, in America especially, many people will maintain a steady eye gaze as a sign of respect and confidence. However, like touch, eye contact has different levels of intimacy. Whether someone feels merely friendly toward you or they are interested in something deeper will show in the pattern their eyes make.

Here’s the difference between friendly gazing and intimate gazing: 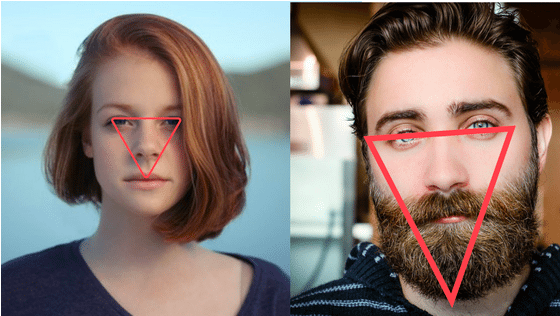 The left picture shows the pattern people’s eyes make when they are friendly with someone. Their eyes rarely drop below the mouth. When someone is attracted to you, however, their eyes go eye-eye-chest, which is a much more intimate way of gazing.