Gestures You Shouldn’t Be Making Abroad

Are you about to travel somewhere exotic this summer? Some body language gestures are different across the globe! Although body language is mostly universal, there are certain aspects that are culture based. Gestures, especially, is a tricky area. Make sure you don’t use the following gestures abroad if you’re not 100% sure what they mean! 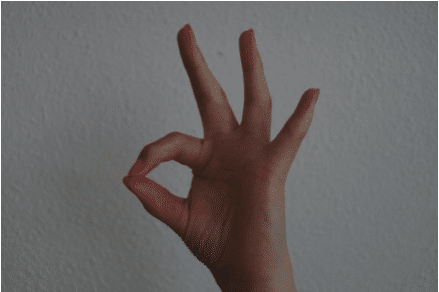 We see the A-OK gesture (see right) as a gesture for “OK” or “excellent”. In France, however, it means “0”. You’re making the number zero with your thumb and index finger and this can cause some very confusing situations.

Imagine being in a restaurant in France. The waiter comes up to your table to ask if the meal is satisfactory and you make the A-OK gesture. While you’re meaning to say the meal is excellent, you’re actually telling the waiter you rate it as “zero” or worthless.

The A-OK signal is also a sign you should not display in Greece. Here, this gesture is the symbol for homosexuality. Showing this gesture to someone means that either you or the other person is gay, which again, is probably not your intended meaning. 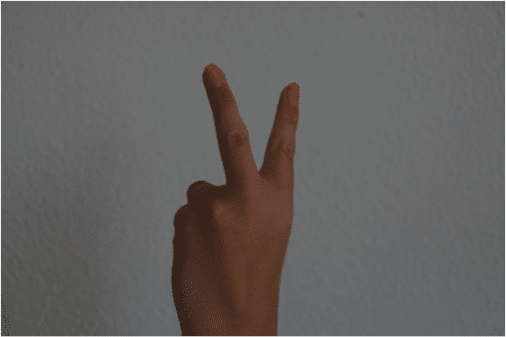 In the Second World War, Winston Churchill was famous for showing the V for Victory sign. You make this sign by raising your index finger and your middle finger with your palm forward (see right). This is a perfectly okay symbol! Make sure, however, that you don’t make the same gesture with your palm turned inwards. This becomes a “fuck you” gesture- Britain’s equivalent to giving someone the finger.

The Western symbol for “Stop” should be avoided in Greece and Turkey. You make this symbol with all your fingers raised and your palm turned outward. While in the Western world we mean stop, the Greeks and Turks will interpret this as “go to hell”. Clearly, this is not the best gesture to make if you’re visiting their country.

Similarly, you shouldn’t go hitchhiking in Greece using the thumbs-up gesture. This gesture is equivalent to giving someone the finger. Good luck trying to catch a ride while using that gesture!

The Greeks also don’t exactly appreciate the V for Victory gesture. Like the “Stop” gesture, this is signaling someone to “go to hell”. When ordering two beers, avoid displaying this or you might find yourself getting thrown out of the bar instead of being served. 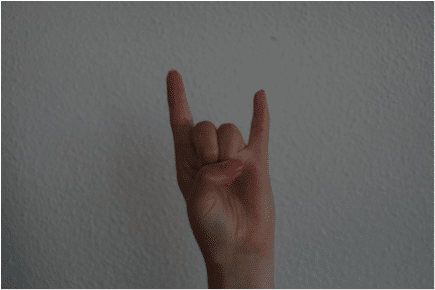 In the U.S., this gesture (pictured right) is used for the University of Texas and occasionally at rock concerts. In Mediterranean countries, this gesture means something completely different. If you use this gesture, you’re not saying someone rocks, but rather that his or her partner is being unfaithful. This gesture should not be used outside the U.S. unless you’re absolutely sure you’re not insulting someone with it.

Greetings are often tricky when meeting someone from another culture. Do you shake hands or kiss? Do you hug or nod? Observing two people from different “incompatible” cultures greet each other can be quite funny to observe. Here are some general rules of thumb:

Personal space is another issue to keep in mind while traveling. In the Western world, it’s common to be talking to someone at a distance of about 18-20 inches, but this spacing varies throughout the world. Mediterranean cultures often stand much closer while talking, which can make you uncomfortable if you’re not used to it.

It may be intimidating to have a stranger in your personal space, but often they don’t mean to harm or insult you- it’s just the way their culture is. Southern Europeans are known to have a personal space of only 8-11 inches.

The same cultural differences can be found in touching. Even within the U.S., there are differences between when it’s okay to touch someone. Globally this is even more so: in countries like India, Italy, Greece, Spain and the Middle East, it’s considered normal and appropriate to frequently touch other people. Don’t be surprised if you find yourself making much more physical contact with other people than you normally would if you’re visiting these countries.

The saying “When in Rome, do as the Romans do” holds very true whenever traveling. You’ll encounter cultural body language traits that you’re unfamiliar with. Instead of clinging to your own values and culture, why not try to blend in?

Start by observing how the locals act with each other. What gestures do they make? How close do they stand together? Do they touch each other a lot or do they avoid contact? How fast do they talk? By observing these things and then trying them yourself, you will be more readily accepted in this other culture, even if you’re just visiting. Moreover, people will highly appreciate it if you try to learn their language and respect their culture. This will help build rapport and possibly new relationships.

This guest post is by one of our certified body language trainers: Michiel Andreae from The Netherlands. He loves to teach people how to improve their communication skills through body language and to coach people to make better use of their nonverbal skills. Find him on Twitter.

2 replies on “Gestures You Shouldn’t Be Making Abroad”