You know that awkward moment where someone is coming to greet you with some kind of professional touch and you have no idea if they are going for the handshake or the hug? So you’re left kind of putting your hand out but also not sure if you should open your arms for the hug or you just wait for them to approach and do nothing at all? Then you fumble through your verbal greeting and are left struggling to take down your social anxiety so you can carry out your interaction with them. When writing my book Captivate, I sought to discover how to deal with social issues like this that plague our everyday lives.

Here’s my solution for navigating greetings so you’re never left wondering how greet someone again.

The key to doing greetings that set you up for great interactions is to be comfortable with the option you use. That way you get off to a smooth start that sets the tone for the rest of your time with the person you’re meeting.

If you aren’t sure what type of greeting you should use, choose the one that you feel is most appropriate for the situation. In my book, Captivate, I explain how touch plays a role in different social environments. Armed with that information, you can strategically decide how to greet people based on the impression you want to make.

When someone wants to greet you with a hand, they will angle one shoulder toward you and put out a single arm once they get close. This is your cue to reciprocate by doing the same.

Keep in mind that a handshake tells you more than you may realize. By getting the handshake right, you can show that you’re emotionally stable, agreeable and respect the person you’re meeting. Some people will put their palm out when meeting others, which shows that they are submissive. If you want to demonstrate that you’re equal to the person you’re meeting, do a vertical hand shaking motion. If you want to communicate that you’re confident, make sure your hands are dry. Sweaty palms are an indicator of nervousness.

The level of firmness in your handshake is crucial; if you have a “dead fish” shake, it’s going to show that you’re weak, while a “death grip” will turn people off. Practice your handshake on a friend or family member to ensure that you’re hitting that firmness sweet spot.

People who are natural huggers and/or who feel friendly toward you will often prefer to greet you with a hug instead of a handshake. When someone wants to hug, they will approach you with their arms open and their torso facing you in preparation for the embrace.

To avoid awkward hugging, you need to be prepared to go all in. If you’re uncomfortable with it, you’ll end up giving the other person a half hug, one of those weird hugs where you embrace with your arms but your chests don’t touch, or some other variation that is worse than not reciprocating the hug at all.

While not as common in North America, in many European and South American cultures people prefer to greet one another with kisses on both cheeks.  This is one of the most intimate forms of greetings between acquaintances and, if you’re not familiar with it, it goes something like this:

Someone will greet you face first, angle their head out toward you on the approach, put out one or both hands out so they can grasp your arms and embrace you when they go in for the cheek kiss. During the embrace there will often be a moment or two of close talking.

Compared to a handshake especially, this type of greeting is powerful in personal relationships because it strengthens the bond between two people. Whenever two people touch oxytocin, the bonding hormone, is released so that both individuals feel closer to one another. The more places and the longer you touch, the greater the amount of oxytocin that is released which is why this type of greeting feels very intimate.

What Do You Do if You Don’t Want to Touch?

Whether because of your cultural background or your personal preference, you may not feel comfortable touching people you aren’t close to and that’s perfectly okay. The key to controlling the type of contact you have with people is sending the right signals.

If you prefer handshakes over hugs and cheek kisses, you can put one arm out toward people as you approach them. Or, if you would rather not make contact at all, raise your arm up and wave when someone approaches you. Soften the signal of not greeting them with the expected handshake or hug by warmly saying that you are excited to see them.

Advance Your People Skills. Improve Your PQ. Level Up Your Life.

Ever wonder what makes people tick? Want to know the hidden forces that drive our behavior? In Vanessa Van Edwards' new book Captivate, she explains a simple blueprint for hacking human behavior. In this science packed, anti-boring guide you will learn:

Learn the new–science based way for winning friends and influencing people.

Get Your Free Chapter 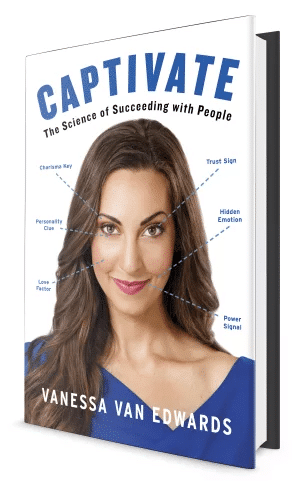